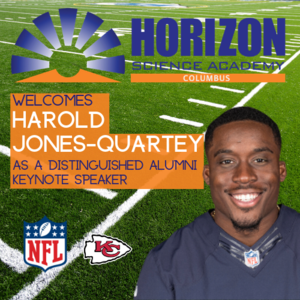 Jones-Quartey is a distinguished alumnus who has contributed to the school’s community since he graduated from high school in 2011 by attending educational programs and other events. “In a gentle way we can build a world with character—but we must first build our own one brick at a time,” says Jones-Quartey.

Listen to his inspiring keynote speech and the interview in the videos below:

Harold Jones-Quartey played at the University of Findlay and was signed as an undrafted agent by the Arizona Cardinals, and then Jones-Quartey played for the Chicago Bears until 2017. After a brief stint on the New York Jets, Jones-Quartey was signed by the Philadelphia Eagles where he played on the practice team when they were Super Bowl LII champions. He currently plays for the Kansas City Chiefs.